Although my company has been involved in the JDRF walk for 11 years, we didn't participate in the walk for 2 years. In 2005, Hurricane Katrina hit and there wasn't a walk. In 2006, we were still recovering and we wanted to come back strong. In 2007, I organized the walk team at work with only word-of-mouth and newsletters sent via email to keep people informed. It was a constant juggle of my regular duties and paying attention to the details for the walk. In the end, I had more than 50 people signed up and we raised more than $7,000.
This year, I decided that an office kickoff was in order. We did this in 2004, when the former assistants to the president and chairman of the board were still employed with the company. I wasn't sure how successful it would be. One major complaint in the office is the absence of company activities that are not work-related. Because it had to be planned before working hours (7:30 a.m.), I didn't think that the raffle would be successful considering everyone is always busy and people generally don't come into work early unless they have to (me included). But I wanted to generate interest through the raffle.
Gift cards worked. Putting gift cards in sealed envelopes where they pulled one and didn't know what they were getting, worked better. I wanted to offer something more than cards, though; however, I am on a budget for what was purchased. Instead of buying inexpensive gifts to offer as raffle prizes, I tried to think of items that would be inexpensive, easy to make, and would generate a buzz. One day I noticed on my shelf a line of vases. Every year my boss sends every woman in the office a bouquet of flowers for "Administrative Assistant's Appreciation Day" and, if you work there long enough, you accumulate a supply of vases. It then hit me . . . some of these vases' neck openings are wide enough to syphen candy inside. Wouldn't that look cool? I've noticed people in the office having an affinity for Skittles and Peanut M&Ms. The stopper was a piece of florist's foam wrapped in gift box tissue and taped at the top. At first I thought about buying plastic flowers and stick them on top, but that seemed gaudy. Wasn't too happy with just slapping a bow on top either. I went to the craft store and came across some wire garland with colorful stars--like confetti wrapped in a wire. I cut some into pieces, stuck them in the foam, and taped the top shut. Since I had multi-colored gift box tissue, I used that on some of the vases. Here's the result: 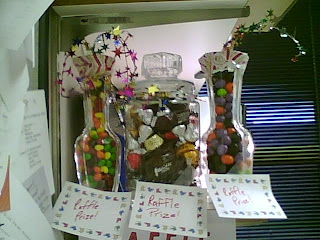 As you can see, the middle jar wasn't a vase. It was the remnants of a Christmas present my boss received last year. It had mixed nuts and, when he was through eating them, gave me the jar to wash out.
Tomorrrow we will be doing a smaller, though similar in scope, kickoff for the superintendents. Same gift cards will be provided as prizes. Instead of vases, I thought of appealing to their construction sensibilities: practicality and food. I went to Lowe's to purchase some gift cards and decided to inspect the painting area for containers to shrink wrap candy inside. I found inexpensive mixing buckets that can be used after the candy is gone: 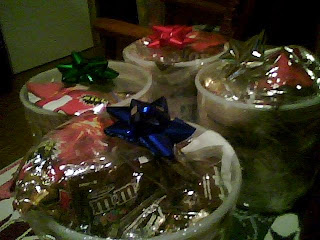 Here's a better view of the bucket: 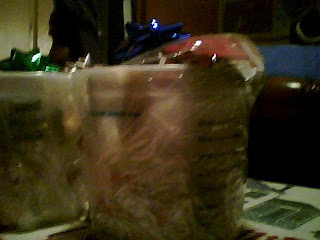