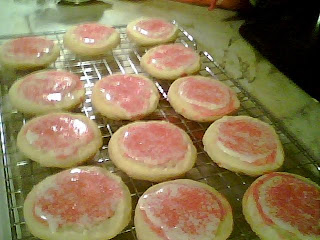 I hope everyone had a good Christmas holiday. If you poll children about what was great about Christmas, they'd probably reply on the gifts they received from Santa. If you poll adults, most would either say they were glad to get time off from work or glad "it was over".

One of my grandmother's favorite memories was the small, live Christmas tree she decorated every year. It had tiny balls covered in blue thread that shredded whenever you moved them. Tinsel and garland that shedded all over the place. I remember metal bells that were faded and on paper-clip type hooks. I apparently loved that tree once particular year. She had stripped it naked and was going to put it outside on the curb for the trash pick-up. When I went outside to play, I brought it back in the house. She thought she could trick me, so when I wasn't around, she took the tree down the street and put it on the curb in front of another house. She never got tired of telling people how she watched me as a little girl clutching onto the main branch of that tree and literally dragging it home from where she left it. In later years we went from a larger live tree to an artificial one until the cats decided the tree was a big jungle gym and dismantled it every chance they got. Putting up a tree was no longer an option. Now I can't bring myself to do it since it's one responsibility I'd prefer not to undertake.

I had three pictures taken with Santa. The first one I ever went through was the typical hysterical screaming, crying, how dare you leave me with this old man dressed in red picture. The next one I was older and looked extremely bored. The last one, and I do mean last, was taken when I was maybe eight or nine. I don't know why I did it, but then why to eight- or nine-year olds do the things they do, but I sat next to Santa and as they took the picture, I crossed my eyes. When my mother saw the picture, she was livid and declared she would never have another picture with me and Santa again. Mission accomplished.

I send cards because we've always sent cards, especially since we receive cards and it's only polite to send them back. Never mind some of those on the list I literally haven't seen in person in decades and wouldn't recognize them if we passed on the street. It's tradition and I think it's the law. I generally send an ecard to those I communicate through email and hardcopy to those either don't communicate via email or whom I've always sent a hardcopy card. It's like jury duty you'll never get out of. I try to send them early as possible because it's one task down and item scratched off the mental things to do list.

As far as presents, I've tried to come up with new crafty things to do. With an eye on the economy, I thought baking cookies would be good to do. The picture above shows peppermint swirl cookies with icing and red sprinkles. I found that making sugar cookie dough and modifying it would be more economical and provide more variety than buying tubs or tubes of pre-made dough. What I learned from that was to dye the portion of dough with the swirl in red using the stand mixer instead of adding the food coloring and mixing by hand. At the end of the process, my hands and counter looked like a CSI investigation. I also made toll-house cookie dough and gingerbread dough. I wrapped them in wax paper, placed that in freezer bags, and kept six tubes of cookie dough in the freezer waiting to be used. Baking off from the freezer was much easier than making dough, refrigerating it, and then baking all at the same time. The dough will last about two months in the freezer (same amount of time if you purchased pre-made dough and froze it). I gave out some at work, brought some as a gift to a friend I had visited, and had some leftover for the cookie jar. Economically, it was cheaper than buying $3 or $5 gifts in abundance to give out at work. It's still an investment if you had to buy all ingredients, but I can use the leftover flour, sugar, chips, etc. None will be wasted.

Normally I make peanut butter fudge -- my grandmother's culinary triumph. Like most cooks from her era, she was always in the kitchen and cooking the same dishes. She knew what she needed to make 50 pounds of candy for the church fair every year and she measured out of her head. She never wrote anything down. When she passed away, I tore through every notebook, cookbook and never found the exact recipe. I vaguely remembered the ingredients from watching her cook as a child. Years ago I found a recipe that had similar ingredients and it's been an annual experiment to see how close I can get to the holy grail of peanut butter fudgedom. This year I made one batch and sent it off. It was too humid to attempt additional batches.

In other years I've made cookie jars with cookie ingredients inside. I wrote the recipe by hand on little cards tied with bows and cover the top of the mason jar with Christmas fabric. Problem with that was mailing them turned out to be a problem if the jars break on transit. Some did the last time I tried it. It was also time consuming with prepping the jars, the fabric, cards, and "building" the layers of ingredients within the jars.

One year I tried to make candy wreaths using metal crochet hoops and string to tie off the candy ends. This was problematic due to the string tying cut into my cuticles and caused them to bleed and the candy was never completely cooperative with staying place. The one year I did it was my last.

I think the recipe CD I created a couple of years ago may make another appearance for Christmas in 2009. Like everything else, it's a work in progress.