Art on display at gallery 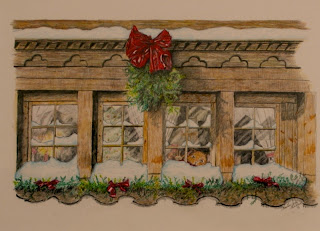 Colored pencil drawing depicting young mouse looking out of a window of a structure reminiscent of a wooden cottage; winter scene with snow, holly, and red bows. Through the window a Christmas tree with decorations can be made out, along with a red candle in the window.

Instantly it reminded me of the style of Christmas card I’ve sent in the past: whimsical, peaceful, and charming. 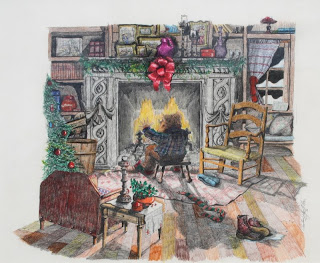 Elderly lady warming herself by fire after coming in from snow. Cap, muffler, shoes are strewn about on the wooden floor. Two characteristics about Christian’s work: severe level of detail and an absence of color in places. There are pictures within the picture on the bookshelf and mantle that beg further study. Also, the mantle and hearth around the fireplace remain untouched with color. Multiple areas of shadow where the fire’s light bathes the furniture in the room.

Four pictures appeared at the art show commissioned by the Coconut Grove Theatre in commemorating the theatre’s 40th anniversary and the premier of the play, “Ladies in Retirement”. The four pieces are entitled: “Lucy in Disguise”, “Nick Nacks”, Albert Upsets the House”, and “Nun on the Run”. 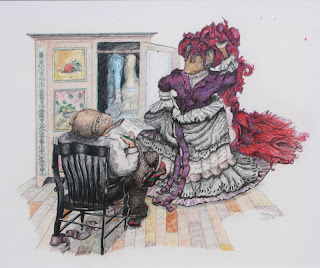 At first glance, the female mouse is wearing a red feathered boa; however, on closer inspection, it is a Rapunzel-esque type of wig. Many details to consume: ruffles and bows of Lucy’s outfit, the ribbon under the chair occupied by a male mouse, fruit on the cedar robe displaying two dresses, and the list the male mouse is holding. It reads: “Steps to trap Aunt Helen; 1) dress up Lucy, 2) dim light (a lot?)” 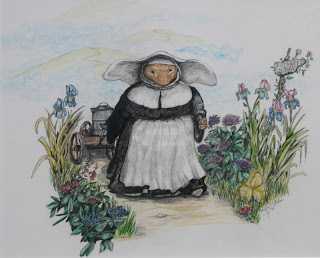 Mouse in “flying nun” habit – unsure if male or female – pulling wooden wagon with “oil” can. Sign on left states “Estuary House”. The details are in the different flowers and grasses that flank the simple dirt path with a faint blue sky in the background. 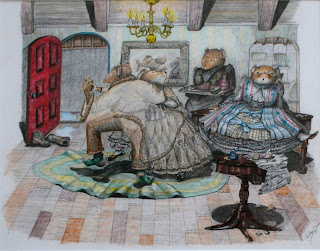 Four mice – three female, one male (Lucy and Albert?); male and female dance as one sits restlessly in a chair and the other is depicted as a servant (embroidery on her dress); seashells on the floor with glue and more shells on the table. A newspaper is strewn, --- Times, with the headline “petty cash stolen”. Mirror reflection of dancers. 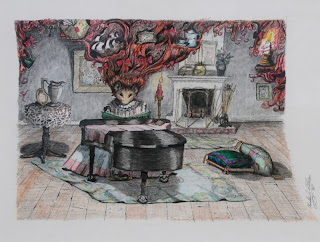 Female mouse (Lucy?) sits at a piano with a purple cloth across the hood. Most of the background is colorless pencil as her red hair takes a life of its own and shows different objects among ribbons: a striped, lit candle, pitcher and cup, clock, book (“Mice and Men”), ship with sails, key, and a black teacup with spilt contents. 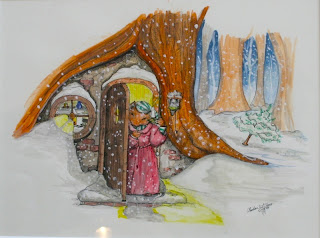 Mouse in striped cap and pink pajamas holds a candle, waiting for someone to arrive during the night-time snowfall. Dwelling is a mix of tree trunk and brick/mortar. Round window reveals objects inside on a shelf and takes up a section in each pane: chair, books, and a vase. Background shows a green tree with snow and far background contains white outlines of winter trees. 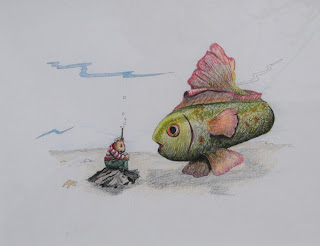 Mouse underwater with snorkel and fin, sitting on a rock on the ocean floor in front of a very large multi-colored fish. Tiny starfish to the right and blue lines delineating water. Fish’s tail is curled around itself, almost to fit into the frame. 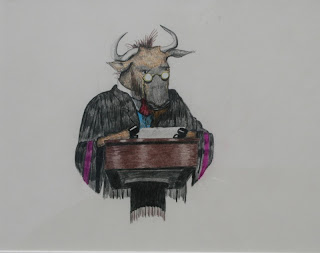 The gnu has gold-rimmed glasses, a red bow tie, and an academic regalia gown (one stripe – Master’s degree?). He appears to be reading from the podium, which is suspended in mid air.

“Watching the Day Burn Down” – no date – Mixed media

Female rabbit strolls in a garden of yellow daisies and red mushrooms with black dots. Is she in miniature or is everything around her larger than life? She pushes a doll carriage containing a doll of a rabbit and a teddy bear. The time is sunset as the sun goes down and the orange sky gives way to darker skies, stars, and a sliver of moon. The oblong shape of the piece allows the eye to focus naturally up and down, gathering more detail of the grass along a dirt path, and use of shadow behind the female rabbit.

Synopsis at art show: “One of a long line of early commissions for fellow teachers during Christian’s stint as a kindergarten teacher in One of the pieces (along with “Nicholas Goes Fishing” and “Stepping Out” won Best in Show at his first art exhibit at the Art Expo in CA. 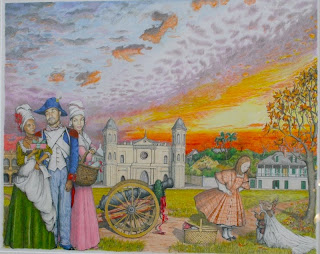 Upon closer inspection, part of the buildings in the background have pencil marks, but no coloring. Great detail in expressions on the character’s faces, the bow and wreath on the cannon, and the nearby basket. Beautiful sunset. T-boy is gesturing to a nearby maple. From the disapproval on the girl’s face, I suspect T-boy has a homemade parachute and announced he would jump out of the tree to try it out.

Synopsis from art show: “From the children’s novel, Tales of the Louisiana Moon”. In 1721, Adrian Pauger laid out the Place d’Arms (today’s ) in the little French town of . For many years the square was used as a military parade ground. Maple trees were planted on either end of the grounds in 1806. In the ancient , a cannon in the Place d’Arms was fired at 9 o’clock every evening announcing the nightly curfew. The town gates were shut tight and all the men of good will were expected to be safely in their homes. Actors: Shemar Moore (Malcolm), Tonya Lee Williams (Olivia), Sinna Goins (Callie), Camryn Grimes (Cassie), and T-Boy (mouse). 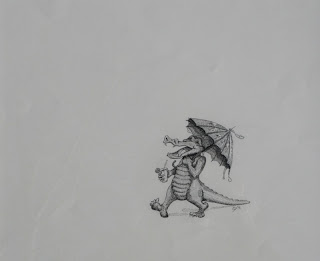 French for “Good times”. Simple sketch of an alligator carrying a fleur-de-lis embossed umbrella adorned with beads and carrying a drink in his hand. Uniquely . 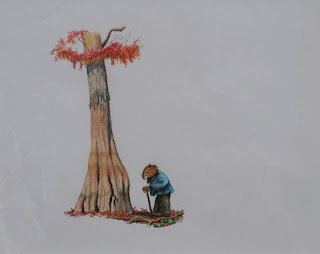 French meaning “sponsor”, but local Cajun refers to a parrain as a godfather. Elderly woodland creature (badger?) with spectacles, blue jacket, checkered pants and a cane with gold tip in front of a cypress tree. Unlike other works where most of the characters are engaged in activities, this rendering shows an aged creature with a bent back, looking melancholy at an autumn tree. 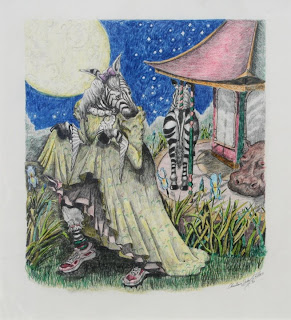 Night scene – large pocked moon in background as a female zebra in a long, yellow gown, sneaks away. Picking up the hem of her dress reveals a ribbon-hemmed petticoat and pink sneakers. There is light detail on the dress, along with the different grasses and a star-studded sky. She looks worried as she steps away from a nearby carousel with a zebra in the background and the face of a hippopotamus. 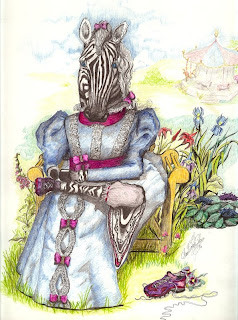 Zebra adorned in pink bows on her mane and her blue dress with lace trim. She is either taking her pink sneakers off or putting them on while seated in a yellow chair. Different flowers and grasses surround her with a faint sketch of the carousel in the background. 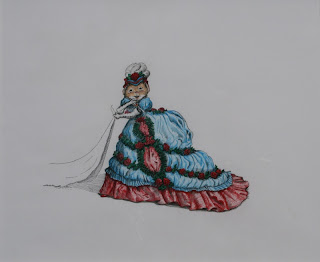 Mouse in a blue dress with pink ruffles underneath, full bustle, wearing a feathered hat and gloves. She is carrying the bride’s train. Her expression reveals she has inadvertently taken a peek and discovered something unexpected.

Synopsis at art show: “Title illustration from the commission commemorating the wedding of Laura Lee Bell and her then fiancé Scott Martin.” 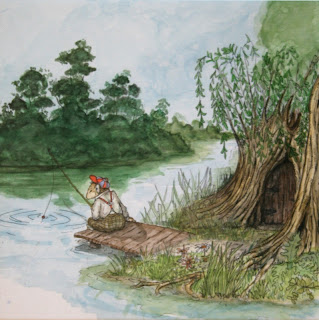 Bayou scene with marsh and cypress trees. A mouse sits on the edge of a wooden dock with a fishing pole watching the bobber (water ripples indicate a possible bite). A variety of flowers and grasses surround the wooden door in the tree. Mouse is in checkered pants, red suspenders, and a red and blue cap. Illustration is reminiscent of works by Arnold Lobel and James Rice. 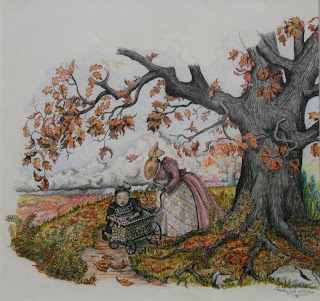 Female rabbit tending to child who is tending to her teddy bear in the baby carriage. Under late autumn, early winter tree with brown grass and leaves around them. Careful attention is made to the rabbit’s dress and child. Colorless clouds in the background and the top of the tree shows pencil sketches of higher limbs that aren’t there. They disappear at the top of the drawing.

Christian said the art show at home caused him to feel vulnerable since he’s showing a part of himself that few seldom see. I told him he was very talented and he would be successful in anything he did. I can’t remember a more absorbing and enjoyable evening.