Mad Hatter's Luncheon - Part III - the genesis of my hat

March 12, 2011 -- I learned of the Mad Hatter event on Facebook and had visions of doing something different for my hat this year.

Googling online produced nothing that I could outright buy. I saw a straw number that was sold in the Quarter, but I wanted to spruce it up a bit. Perhaps I could find a stamp that I could emboss the hat to look Louis Vitton-esque. So I made a trip to Michael's craft store in search for the stamp.

Something caught my eye on a sales table outside the door, but kept on going. Cruising up and down each aisle, I looked at stencils, stamps, buttons, etc., and the only "hat" they had was a sad, straw floppy hat. As I studied everything, that thing I saw when I walked in was at the forefront of my mind. Oh, I thought, just go look at it so you can dismiss it and move on.

On the sales table were table decorations of different types: some stood up like cones and others were wreaths you could put on a door or a table. I looked at one of the cones and thought, this looks like a hat. Once I picked it up, and it felt surprisingly light, I made the mistake of putting it on my head. It wouldn't stay, but something clicked within my creative senses. I could modify it to stay and it would make a wonderful hat. And, I wouldn't have to do much. I kept the cone with me as I returned inside to find the necessary materials for modification. 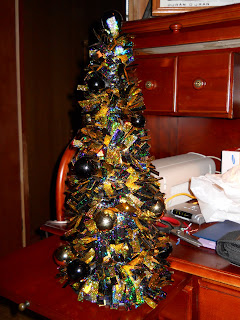 As I said, it was light, but it wasn't featherly light. I needed to make certain it stayed on top of my head. They didn't have any elastic, but they had all different types of ribbon. I selected a dull gold one that was smooth so not to itch. 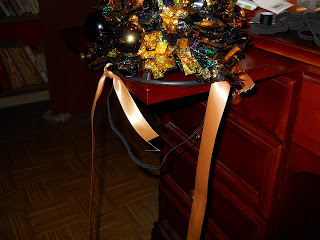 
The black elastic was purchased at Hancock Fabrics for about a dollar, so I had a hat for a little over $10.00. Pretty good considering I would have paid five times as much for a ready-made hat.

A week before the event -- This was the first time I saw it on top of my head in the mirror in the bathroom. Shock came over me. The mirror cut the hat off almost in half. I checked the tag on the decoration and it said "19 inches". I was adding a foot-and-a-half of height to myself. It reminded me of a Las Vegas showgirl's outfit. I mentally backed up -- could I do this? How would it be received? I gave myself permission to be foolish and decided not to dwell on what may not happen, which would be complete embarrassment on my part, and focus on the task of getting it stable. Trying on the hat would be kept to a minimum less I'd talk myself out of wearing it.

At first I thought about cutting the round base into four parts and wrapping ribbon around cotton to soften it on my head. It was very flexible, but hard plastic. I needed the base to stay intact to keep it stable, so trimming it down was not an option. It was already divided into two halves, so it gave around the crown of my head without too much discomfort. And trying to pad it would detract from the look of it. "You have to suffer to be beautiful" is the old saying and I'd just have to put up with it for a few hours at the event. 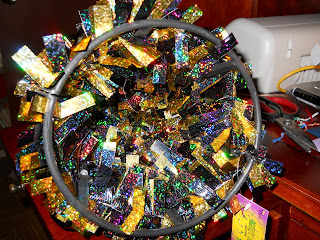 I chose the side I wanted to be the front and sewed the elastic on either side to slide under my chin and behind my ears. I'm not that proficient with a needle and thread, but did my best with it. The ribbon served as decoration, coverage of the elastic, and additional stability to the hat. I sewed the knots on either side so they wouldn't come apart. 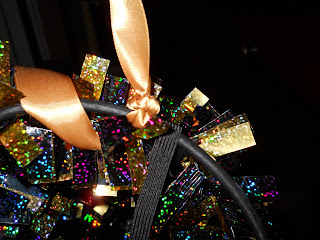 I had to trim the ribbon, but didn't want frayed ends. I remembered I had some clear nail polish I used as "lock tight" for my spinning shoes (yes, it's a great multi-tasker). Carefully I sealed the edges of the ribbon with the polish and they didn't fray at all. 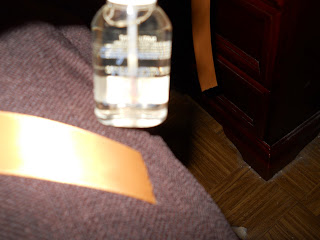 One tiny piece of ribbon left, so I elaborated the top with a final bow, which I think came out nice. 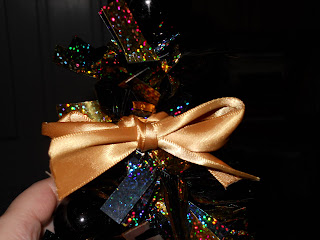 The whole project took about ninety minutes with the sewing and adjustments. Thank goodness it was already together with the colorful material and balls. When I tried to find craft websites on how to convert the table decoration to a hat, all they had was turning a hat into a table decoration. It's official -- I am weird! 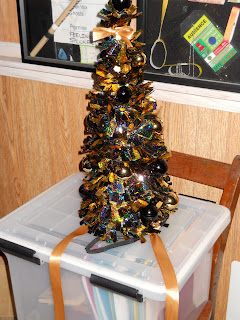 Storing it would be a problem until I discovered that I could stand an old storage box on its side and it made a strange yet wonderful "hat box". 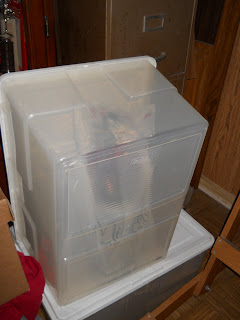 Now it was a matter of getting through the next few days until that Sunday when I would transport my hat to Cajun country and have an unexpected adventure.