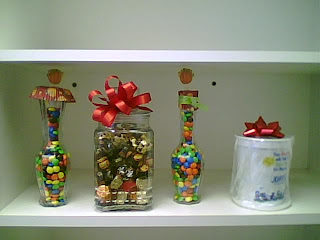 When I learned that my company planned to have a corporate team at JDRF this year, I fell back on a motto I've used when coordinating the kickoff meetings: go with what works. The candy vases I made last year went over well. They were a good incentive for selling raffle tickets and they came out "cute".

I attended the JDRF luncheon, which is the chapter's "kickoff meeting". They distribute the collection envelopes, posters, etc., for captains to use for their company or family teams. This year JDRF had a plastic tub with a removal lid with a slot for change or cash. Sort of like a shaker can. When I saw it, I thought it would make a great candy tub as a raffle prize. Only one issue: shrink-wrap requires heat and the tub doesn't like heat very much. In fact, I had to hold back or I would have created some form of modern art. Molded plastic shrink wrap encasing melted plastic and molten chocolate bars. Possible art titles: "sweets beyond reach" or "booby prize for residents of Hell". Still, the tubs fared well.

When I decided to do the candy vases and jars this year, I went to Wal-Mart on a recon mission. I looked to see what they had as far as inexpensive candy and just to get some creative ideas in general. One of their new offerings is something called a "Halloween beaker". It's shaped like a chemistry set beaker jar: long, narrow neck and a round base with a flat bottom. There's bone-shaped hard candy (what it tastes like is unknown) and it's only filled 1/4 of the way up. The price was three bucks. I came up with the candy vase first and, in my humble opinion, blows their cheap imitation sky high. Not to mention that recycling vases is a great way to get people involved since I received all of the vases this year via donation, so no additional cost there.

Although the overall look of the vases were good last year, I wanted something better than florist foam wrapped in gift box paper as a stopper. While at Wal-Mart, I noticed in the candy aisle different baked good items for Halloween/fall. One that got my attention was a pack of cupcake paper cups with pumpkin cut-outs on toothpicks. Obviously they were meant for baking cupcakes, but I came up with the idea of covering the top of the candy vases with an inverted paper cup and use the toothpick on top as decoration. I still used the gift box paper as a stopper, but sticking the toothpick into it seemed easier than using florist foam. On some of the vases, I wrapped the paper cups with different colored ribbons, which looked great against the different colored M&Ms and Skittles. I placed all the vases in a box with a lid. I should have considered the height space because all of my little pumpkins were a little bent. They were easily straightened out, but being the perfectionist, it bugged me.

The large square jar should look familiar. It's the same one from the picture last year. It was donated to me by the person who won it as a prize last year. One of the assistants working out at a job site won it this year. We'll see if it gets recycled in 2010.

I'm unsure if I'll do this again next year. I bought gift cards as part of the office raffle offerings and they always go first before any of the candy vases. The superintendents decided to do their own raffle and managed to get four power tools donated for it. In one week, they sold over $2,000 worth of tickets. The office raffle garnished $200. Never underestimate the attractive allure of winning your very own chainsaw!