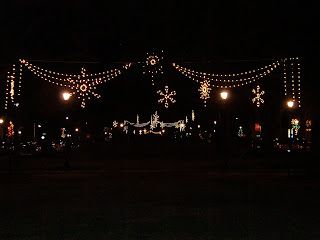 I hope everyone reading this had a wonderful Christmas with friends and family. Mine was filled with blessings recognized.

In the past I've busied myself with many lists: Christmas cards, gifts to order and mail, ingredients for treats such as my grandmother's peanut butter fudge, and items for the Christmas meal. Every year I attempt to send out the cards earlier, buy and mail off the gifts as soon as possible, and pay all the expenses off as quickly as possible. It's my version of the holiday Olympics and my main focus from the week before Thanksgiving to the second week of December. Not this year.

Dad and I have lived together for many years and spend all holidays together, most by ourselves. Most of my friends live out of state and those locally have families and traditions of their own. It was different when I was a child. Dad loved to see me to go under the tree and rip open the wrapping paper. Now that I'm in my 40s and he no longer drives, our "tradition" has been to go to Walgreen's where I head for candy isle and pick out two boxes of chocolates (my birthday is on the 15th) while Dad goes to the card section and select funny cards for my birthday and Christmas. Not this year.

Two distinct medical issues converged upon Dad in October. Unbeknown to us, his appendix had been leaking and was on the verge of rupturing. He was admitted into the hospital in critical condition and had emergency surgery once his blood was thick enough to operate (blood thinners). The infection caused dehydration and left him weak. The other complication was his enlarged prostate. Before the surgery he was barely emptying his bladder. During the convalescence, he needed the use of a catheter bag. Dad was discharged with one and understanding the nuances of the device was a learning curve for both of us. Over the past two months, he developed two nasty urinary tract infections, both requiring emergency room visits. The most recent one put him in the hospital a couple of weeks ago.

Dad's had different medical situations over the years and has gone through dozens of tests and medication changes; yet, despite what Dad has been through, he has exhibited the same mild-mannered, easy going attitude he has shown as long as I have known him.

For example, he was in CCU when the Saints/Cowboys game was televised. He had the game on when I went to see him during the last visiting hour of the day. It was the first time he had the TV on since being admitted.

"All I could get were Muppets on the TV," Dad said, "and the nurse came and put the game on. I should've stuck with the Muppets."

Dad has never given up. With each physical challenge, he has challenged himself to do more to become stronger. I'm very proud of him.

Over the past few months, I've had days where I've felt like Joan of Arc or something that needs to be scraped off the bottom of a shoe. We've taken things as they come along, but it felt as though bad tidings came in rapid-fire mode. I felt helpless with Dad going through medical crises as though I served no important purpose. I was reminded by a good friend that the human body is dynamic and there are internal armageddons going on without anyone's knowledge. The human body, as does life, changes in an instant and we have no control over those changes.

I realized that my role has never truly changed. As his caregiver, I coordinate his appointments, check his medications, and make sure he receives regular medical attention. As his daughter, the most important task is to love him. Nestled within the medical issues is the essence of my father. When Dad returned from surgical recovery, I went to his bedside in CCU. Dad had IVs coming out of both arms, connected to monitors for his heartbeat and blood pressure, and looked tired. The first thing he asked me what how I was doing.

The blessings that I recognize this holiday season are numerous. I have friends and family who love and care for us. I'm fortunate to work for a company that understands what I've had to do over the past few months and work with great people who have pitched in during my absence. We've had great support from the hospital, home health, and his doctors. I don't take the basics for granted: a home, a job, a car that runs, food in the pantry, and good health. Now that's a worthwhile list! More important, Dad is on the road to recovery. We still have challenges ahead, but we'll get through them as we always have.

Dad and I were fortunate on Christmas Day -- he was discharged from the hospital. We didn't exchange presents and didn't need to. Lunch consisted of homemade biscuits with pork and beans, and dinner was a can of vegetable soup we split. We spent time together and it was time well spent.

I hope you all had as meaningful a holiday as I had. 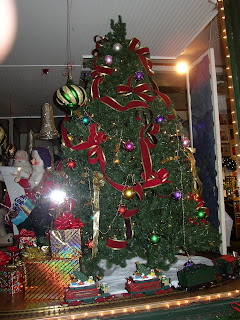