I go to the New Orleans Jazz & Heritage Festival to eat -- each and every day I attend, every year I go. Doesn't matter the band line-ups or the weather forecast. Sometimes I'll get to experience some good musical acts (such as Nova Nola this year), but I always find my food favorites and try out a new dish or two.
This year I had the good fortune of attending the fest on Sunday, April 25th with three wonderful chefs who had excellent food demonstrations on the Zatarain's Food Heritage Stage. In order of appearance: 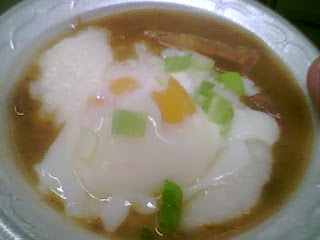 Lee was approached by Esquire magazine to do a recipe that is equivalent to eating "like a man". Because rice is prevalent in the bluegrass region, he had experimented with using long-grain rice in different ways. He ground up rice in a coffee mill and found that the taste and cooking times is consistent with regular grits. Because of the "red beans and rice" theme, he cooked his favorite red beans recipe with the rice grits. You can find the recipe on http://www.nola.com/ under "Food" section from March 18th. As far as the poached egg, the chef explained that there's no recipe for making a soft-boiled egg. In fact, the one he made is far more scientific than anything a novice cook could do at home. First, the eggs are farm fresh and smaller than one at the regular grocery store. And they are cooked in a tub of water (reminded me of an incubator) at a precise centigrade temperature for a specific amount of time. The result is a yolk that is the consistency of firm jelly (think of cranberry sauce out of the can in one piece). Absolutely wonderful. 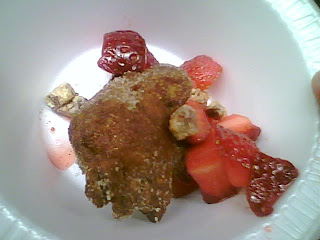 Technically, they aren't beignets. Beignet dough contains yeast and when fried (such as the best ones on the planet at the Original Cafe Du Monde in the Quarter) puff up, but aren't able to fill properly. This recipe is almost like a choux ("shoe") or profiterole pastry dough where once done and baked/fried, you could fill like an eclair. In this particular recipe, the dough was cooked and then eggs were added until it pulled away from the sides of the pan. Once it was this consistency, a commercial product of pecan paste was added. They were fried in canola oil and dredged in cinnamon sugar. Louisiana strawberries were cut up and were only allowed to macerate for a few minutes to have some "strawberry juice" to plate over the beignets. If you place sugar on berries for too long a time frame, you wind up with a mushed up product almost akin to pureed fruit. If you want the recipe, email Christy from the address on Bayona Restauant's website. Great dessert! 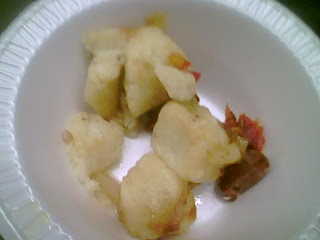 Donald Link recently received the 2010 James Beard Award for his latest cookbook Real Cajun. I'm not sure if the recipe is in there, but it is a basic potato dumpling/gnocci starchy dough. Donald demonstrated that the dough should give a little when pulled after the dough has been formed. Then it is a matter of rolling it out by hand into a long tube. He said it is a great Sunday meal at home where he can make gnocci and toss them with sauce or, in this recipe, saute in oil and add spring onions (or known as green onions everywhere else) and andouille. At the restaurant, he has a gnocci board that will indent the dumplings by passing them over ridges in the board; however, home cooks can mark each dumpling with the tines of a fork. The ridges will catch and hold the sauce, so it is an important step to do.

Cochon is part deli and part butcher shop where you can purchase boudin and andouille that has been made on the premises. Donald said that his cousins still make boudin in different areas of the state, and each one tastes different from the other. They put the sausage in casings by hand whereas the cousins use hoppers and machines to make massive amounts of sausage at a time. One of the attendees lives in Hawaii and planned to bring back 16 pounds (yes, not a typo) of andouille to the island. He attends Jazz Fest every year and uses the sausage year round until he returns for the fest and another supply.