My last day of Jazz Fest on the last day of Jazz Fest. As predicted, rain was expected, but that wouldn't deter me. I still had my plastic poncho and packed myself down with plate caddy, plastic bags, tin foil, and my lawn chair. Hard to believe, but I didn't consider putting on sunscreen - why bother?
Now the grillades and grits were wonderful the previous weekend - love that roux gravy. My "traditional" breakfast at Royal Blend is a bacon, egg, and cheese biscuit. Biscuits are homemade and no cheap fast food dollar biscuit could touch it. A single cappuccino with skim milk and OJ complete the food chain. Normally I wouldn't have singled out such humble fare, but it all looked too photographable. 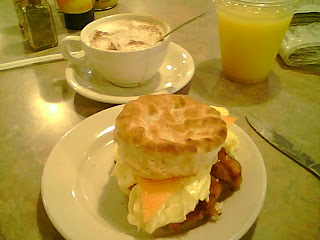 When I arrived at Marconi and waited under the tent at the shuttle area, it began to pour. I didn't need to wait to get on the Fairgrounds to don protective lamination. I mentally prepared myself for arrival and what I would need to do to avoid slipping in the mud or forgetting to buy something. Remember, what I wouldn't accomplish would have to wait until next year.

There was some wait at the gate and rain fluctuated from hard to light. Once I got in, it seemed like a deserted town. 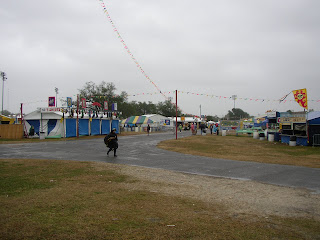 T-shirt tents were closed temporarily to wait for the rain to subside. Trying to get around in a hard rain would be a problem, so my plan was to get my T-shirt, food, and then go to the Grandstand on the bleachers out of the rain.

One of the entrees I looked forward in getting was fried eggplant with crawfish sauce. I arrived at the food booth, but was asked to return in 20 minutes. Although they were supposed to be ready before the Fairgrounds opened in order to roll on time, they were ordered to shut off the burner that heats the oil to fry the eggplant. Can't have soggy eggplant, so I strolled around and set my cellphone alarm to ring in 20 minutes time. Once my phone alerted me, I ran back to the booth and received the first order of eggplant crawfish on the last day of Jazz Fest. 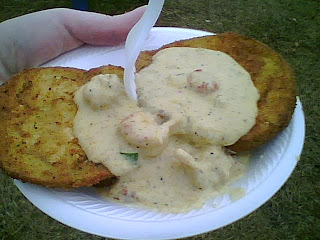 I didn't eat it immediately, though I wanted to. Instead I took out tin foil and wrapped it up tight and placed in a large plastic bag with enclosure. Once my T-shirt was purchased, I went in search of an entree I read about in the newspaper. There was a booth selling pies and I felt the urge to try the sweet potato pie and the sweet potato turnover. I purchased them, wrapped them up, sealed them in the bag and finally purchased rose mint tea and crawfish strudel.

As I neared the Grandstand bleachers, I noticed how they were all wet, even the ones at the top. The overhang wasn't enough to spare them and the wind was strong enough to dampen them despite the overhang. I could have opened my chair, but realized rain would come and I'd get soaked. My favorite tree next to the pond on the Fairgrounds wouldn't offer much protection either. I knew the Lagniappe Stage would have protected seats, so I found a dry one under a tent across from the stage.

I didn't know who was performing and didn't have a program with me. There was a flamenco dancing group with a wonderful Spanish guitar. I took the opportunity to eat as I watched the performance in amazement. 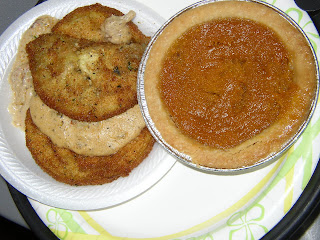 "The" Fried Eggplant with Crawfish Sauce and Sweet Potato Pie

The eggplant was crispy with a light herbal flavor. The sauce was creamy with ample amounts of crawfish throughout. I knew what I was expecting and wasn't disappointed. The sweet potato pie was over the moon: flaky crust with the sweet potato filling that had such a wonderful mouth feel. I compare it to the richness of eating high quality ice cream.

After the flamenco dance group was Nova NOLA, a Brazilian jazz / New Orleans strut fusion music group. I could not have been luckier since the group was wonderful (Google them, seriously) and the rain had gone from a sprinkle to zero flat. In fact, the sun came out at one point. As the performance continued, I ate the last of my vittles. 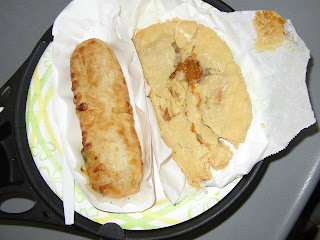 As you have guessed, the crawfish strudel is one of my all-time favorites and would eat it every week if I could. The turnover had somewhat of a soggy crust, but that was my fault. I purchased it early and sealed it in a bag. Condensation from the steam caused it to be soggy. There was a sweet shortbread-like taste to it and the sweet potato filling was thick and rich like the pie. I'll definitely eat another one next year.

Once Nova NOLA finished their set, I finished my food and walked out of the Grandstand into a sea of people. I wondered if the crowd was different from my "wasteland" picture I took only two hours before. Check it out: 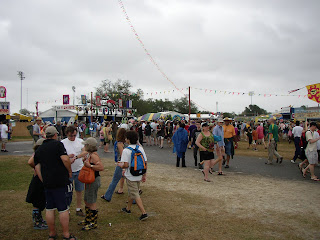 And on my way taking this picture, I "ran into" a second line of Mardi Gras Indians. Only at Jazz Fest. Only in New Orleans. Take care and travel light. 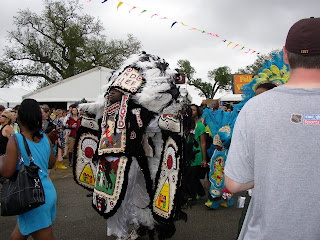