Julie, my long-time friend from high school, came into town on business and wanted to go to Jazz Fest on the second Friday. Problem was the possibility of rain, but I managed to find two clear rain ponchos. Last time we went to Jazz Fest was two years ago and all we had were small umbrellas when it poured on us. Tip umbrella forward - back gets wet. Tip umbrella back - lap gets wet. Wind blows rain - doesn't matter because you're soaked. We left before Billy Joel took the stage. The clap of thunder was our signal to leave. Julie brought up our mishaps when we talked about doing the fest again. I assured her that we would leave before the rain drenched us.

We arrived from the shuttle and onto the Fairgrounds about 11am. We stationed our collapsible chairs on the front line of the "chairs only" section in front of the Acura stage. We had gone to Royal Blend for breakfast at 8:30am, but once on the Fairgrounds, the smells of seafood cooking just reawakens your appetite. We took shifts in going for food and I made a dash to the Crawfish Monica booth. 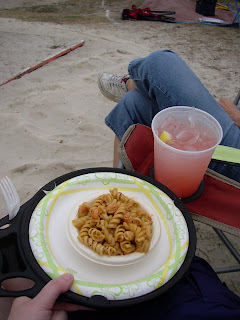 Crawfish Monica (on a Plate Caddy) with Strawberry Lemonade

Crawfish Monica is a blend of crawfish cream sauce and fusilli pasta with a dash of spice and special magic that only that dish contains. It's definitely one of my fave dishes on the short "got to get it" list at Jazz Fest.

The "plate caddy" was an invention I came across during TV viewing several years ago. I usually don't pay attention to such devices, but it immediately struck me that it would be perfect for Jazz Fest. It's been a mainstay of my Jazz Fest ensemble ever since. I usually pack a few paper plates underneath and switch out after one or two uses. There are holes to transport plastic utensils and napkins. One major drawback: large plastic cups will not conform to the built-in cup holder. It's worth being able to balance a few items on the plate than try to juggle them in your arms or hands. I always have someone ask me where I got it. It's great for transporting and eating while seated in a chair. 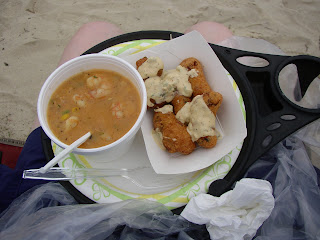 The shrimp and grits entree was a new offering at Jazz Fest. Unfortunately, it fell flat in my opinion. I looked forward to trying it and the portion given was ample. The grits were lumpy in the stew and the overall taste didn't have enough spice or cajun ambrosia I expected.

Crawfish beignets are another story. They are on my short list and are a combination of hot and cool. Beignets are small drops of dough containing crawfish which are deep fried. Then a cool remoulade sauce is lathered on top. Remoulade sauce recipes vary, so trying to pick out the ingredients used for this sauce would be a futile exercise. Unless the purveyors who create the entree publish the recipe, you'll never really know.

Most of the day was spent chatting with Julie, dancing to the Dixie Cups and Earth, Wind, and Fire, and trying to duck the raindrops, which we were most successful in doing.